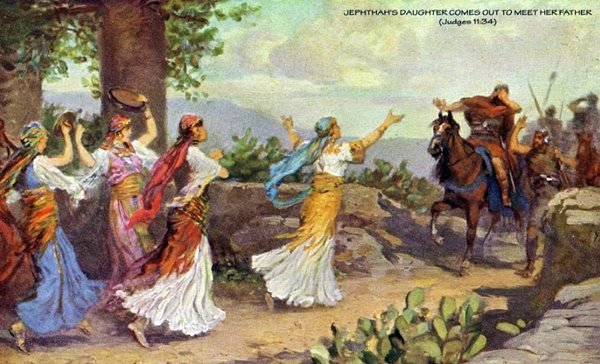 The Bible is full of stories of people keeping their word, taking and keeping vows, keeping a promise and contract, or covenant.  This is an attribute we seldom see done today.

One example from the Bible that has been the subject of controversy for many years is the story of Jephthah’s daughter in Judges, Chapter 11.  Jephthah was a Judge who presided over Israel for a period of six years.  At one point in time Jephthah led the Israelites in battle against the Ammonites and, in exchange for a victory, he made a vow to God to sacrifice whatever would come out of the door of his house first.  As Jephthah gets closer to his home, he is shocked to see his only child, a daughter, come through the door running to meet him dancing and rejoicing to see her father return.  Jephthah is horrified at the thought of having to keep his vow, but he knows it must be done. Jephthah explains to his daughter the vow he made to God.  She understands his dilemma and agrees to follow through in fulfilling the vow.

In reading this story from the King James Version of the Bible, one would think that Jephthah sacrificed his only daughter.  Here is how Judges 11:29-31 reads from the KJV:

A much-respected scholar and teacher, Henry M. Morris, explains it this way:

“The problem is that the Hebrew conjunction “waw” (translated “and” in our text) is very flexible in meaning depending on the context.  Here, “or” is better than “and”.”  That is, Jephthah vowed that whatever first came out to meet him would be dedicated to the Lord:  If a person came out (Jephthah was probably thinking of a servant), he or she would be dedicated to God’s service at the tabernacle, as Hannah later dedicated Samuel (1 Sam. 1:11). Or, of an animal from his flock came out; it would be sacrificed.”

Jephthah didn’t sacrifice his only daughter.  The text emphasizes the daughter’s perpetual virginity and not her death.  Besides, child sacrifice was/is an abomination to God and is condemned in Leviticus 18:21.  Instead, Jephthah committed her to lifelong celibate service at the entrance to the tabernacle, just as other women were privileged to do.  The daughter knew she would never birth a child and for two months “bewailed” her virginity with her friends and then returned to her father to begin her service to the Lord.

commitment covenant keeping your word allegiance loyalty ] commital
05Mar
THE LOST COIN of Luke 15:8-10
05Mar
JESUS IN ALL THE SCRIPTURES
05Mar
ABOUT THIS WORD "HORN" IN THE BIBLE
Comments