JESUS IN ALL THE SCRIPTURES 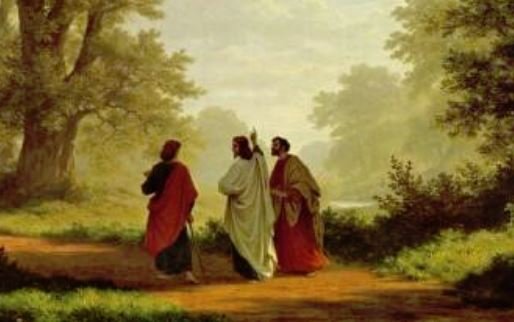 Several years ago on a trip to Israel, my wife Julie and I were able to go to the road leading to Emmaus from Jerusalem.  I remember how beautiful it was in the particular spot where the guide explained how it was thought to be the approximate place where after His resurrection, Jesus had walked with two disciples as He explained the fulfillment of scriptures "concerning himself".

That has to be the best Bible study ever presented anywhere!

Only one name is mentioned of the two traveling disciples and that is Cleopas﻿. Imagine yourself as being the other disciple. At this point in time you're both sad and confused, not understanding how Jesus, whom you believed to be the Messiah, whom you thought would be a conquering hero sent by God to restore the dignity and prominence to the Jews by delivering them from the occupation of the Romans, but instead, just the opposite had happened. Seemingly powerless, Jesus was arrested, insulted, scourged and nailed to a cross where He died and was then buried.

What a disappointment it seemed to the disciples!

As they walked from Jerusalem to Emmaus the two disciples were probably discussing, "Where do we go from here? Shall we look for another who is the Messiah?".

Then all of a sudden a "stranger" appears out of nowhere and joins in the conversation by asking what they are talking about. ﻿

As they explain their grief and﻿ disappointment, Jesus interrupts and says, "O fools, and slow of heart to believe all that the prophets have spoken: Ought not Christ to have suffered these things, and to enter into his glory? ﻿And beginning at Moses and all the prophets, he expounded unto them in all the scriptures the things concerning himself.﻿" (Luke 24:25-27)

Jesus, seen as a stranger to the disciples, didn't reveal who He was at that time but explained how the scriptures were fulfilled through Christ, the Messiah. Later they would realize they had been conversing with the resurrected Jesus, the true Messiah!

In that time the New Testament had not yet ﻿been written. For a moment, pretend that it has and while you and Cleopas﻿ are walking, Jesus explains the scriptures to you.

"And beginning at Moses and all the prophets, He expounded unto them
in all the Scriptures the things concerning Himself" (Luke 24:27).

In other words, dear reader, if you have Jesus, you have all you need!