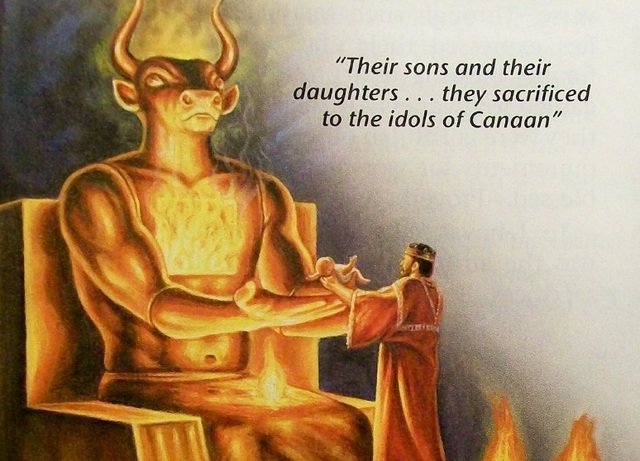 The Bible tells about a place near Jerusalem that people of Old Testament times made sacrifices to one of the most despicable pagan gods ever imagined. That was the god, Molech and the place where people sacrificed to this "god" was named Topheth.  What did people do to honor this false god?  First of all we must realize the spiritual condition of the people had fallen to disgrace.  Although they were "Children of Israel" and God's chosen people, they had intermarried with and lived among other races and even adopted their false gods.

So Topheth was the area where the people would go to win the favor of Molech by sacrificing, not fruits of their labor or flocks of the field, but instead they would sacrifice one of their own children.  The sacrifices would include children up to four years of age.  The parents of the child would decide what favor they would ask of Molech.  Maybe more income, a bigger home, better health or a better job.  Once they had made a choice the child was given to the "priests" of Molech and as drums beat loudly to drown out the cries, the child was thrown onto the arms of a brass idol of Molech that was glowing red hot from the fires below.  Walking proudly away the parents would most likely mutter something like this, "Now maybe life will be better for us for we have honored Molech".

In the past 40 years, 55 million children have been murdered by abortion. We have far out-done the sacrifices of the worshipers of Molech in the place called Topheth.

Ballad Of The Unborn

My shining feet will never run on early morning lawn;

my feet crushed before they had a chance to greet the dawn.

My fingers now will never stretch to touch the winning tape;

my race was done before I learned the smallest steps to take.

My growing height will never be recorded on a wall;

my growth was stopped when I was still unseen and very small.

My lips and tongue will never taste the good fruits of the earth;

for I myself was judged to be a fruit of little worth.

My eyes will never scan the sky for my high-flying kite;

for when still blind, destroyed were they in the black womb of night.

I'll never stand upon a hill, spring's winds in my hair;

autumn's winds of thought closed in on Motherhood's despair.

I'll never walk the shores of life or know the tides of time;

for I was coming but unloved, and that my only crime.

Nameless am I, a grain of sand, one of the countless dead;

but the deed that made me ashen grey floats on the seas of red.—