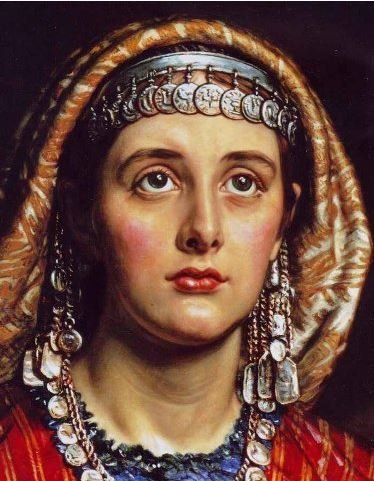 In Luke 15:8-10 it tells the story of a woman who lost a coin and she's very disturbed about the loss. Have you ever wondered why a simple lost coin would be such a concern to a woman that when she found it, she would call her friends and neighbors together to celebrate? It's like having a block party today over the finding of one lost coin.

Here is the reason why: When a woman married in those days the bridegroom would give the bride a gift of silver coins which the bride would wear hanging from her forehead as a decoration and as a sign to others that she was married.

The coins were highly prized and the woman would be very careful not to lose one because if she did, it could possibly be seen as a lack of respect and/or lack of affection by her husband. In fact, he could even accuse her of being unfaithful to him, leading to a divorce! The coins were "sacred" to the bride and they could only be spent in the event of her husband's death.

So now we can understand why, when the woman in the parable found the coin she went to her neighbors who helped her rejoice in the newly found "lost" coin and as the scripture says: "Likewise, I say to you, there is joy in the presence of the angels of God over one sinner who repents."﻿﻿

There is a celebration in heaven whenever a person repents of their sins and accepts Jesus as their Lord and Savior. That, my friend, is the essence of the parable of the Lost Coin told by Jesus in Luke 15.

Luke 15:8-10 Lost coin
05Mar
JESUS IN ALL THE SCRIPTURES
05Mar
ABOUT THIS WORD "HORN" IN THE BIBLE
05Mar
Jephthah’s Daughter
Comments